All of the worlds problems, Environmentally and Biologically can be Linked back to 1937 Cannabis Prohibition. Environmental destruction is inevitable, however, UTILIZING CANNABIS (again) WILL SAVE US. Yea!

A Non-Cannabis Utilizing society is absolutely a DISPOSABLE ONE!
Sustainability is Cannabis' middle name.   CourteousSustainableCannabis

Our planet is being Poisoned because of our flawed, Energies, Fuels, Textiles, toxic materials and massive polluting. Most could have been avoided had we used cannabis, "a virtually non toxic plant that kills toxicity, with the Most versatile Uses and growing conditions".  We Can Prosper and Thrive Using Cannabis! 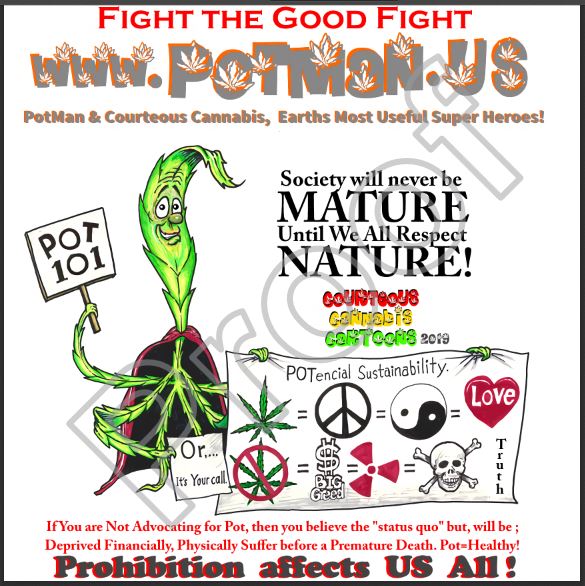 Nobody should be Blaming Ourselves (humans) for Our "Dysfunction & Corruption", it Starts at the Top and is intentional for "their" Profit.
Some of History's Pivotal Moments are Falsely Documented by the most Corrupted, Powerful  =  Richest People on Earth (the Corruption), hence Our societal & Global situation.
Apparently, mankind has been manipulated throughout History, but it's Never Too Late to "Learn".
World Sustainability Facts are Still being Suppressed by the "worlds richest" who manipulate & control Our Politicians, Our Media and Our very Own Perceptions!
Courteous Cannabis and PotMan are humanitarian SuperHero Educators Working to Help Protect Our Earth and All who inhabit this magnificent world,.. including You.

Our Incredible Universe created Our Natural Planet, also providing US with a Miraculous "Plant", aka "Cannabis", that Helps People and Planet stay Healthy.
Earth was a Beautiful planet before becoming Toxic, unfortunately the one material (plant) that would have helped this planet the most, was "outlawed" in 1937.
Prohibition against a "Plant", has and continues to Destroy Our beautiful Home. Hemp is Key for Sustainability, especially when applied 50,000 different ways as it was meant to be just like the Universe intended.
Our current Industries "Should be Utilizing", but instead, "go around" Hemp (for Profit), therefore producing Inferior, Flawed; Fuels, Products, Infrastructures, Environments and Planet.
This Plant named "Cannabis" is so diverse, it can Feed the masses (Healthiest Foods) while also being the #1 source / choice in Industrial and Energy "Material", capable of sustaining and progressing any race of intelligent beings.
The Humans who pushed 1937 Prohibition, well actually, just a "Few" of them, "Ruined Life" for everyone and everything by Suppressing the "Everything Plant" just when the populations Needed it most.
Their own agendas superseded the Health of Our precious Planet and all of its inhabitants.

Courteous Cannabis says: Utilizing Cannabis in just about Everything, is the best way to progress as a civilization. Had we followed Ford's inventions, the Earth would Not be Heating Up so rapidly from decades of "Carbon Positive" Products, Fuels & Power Plants.
Ford showed US how to make "carbon NEGATIVE" Products, more than just fuels & car parts, "Utilization" is about "Worldwide Sustainability"! It's also about how it Purifies Our Planet! It's about our Flawed Infrastructure, Medicine, Buildings, Batteries and Food and about 60,000 other product improvements.
Our problem is that Most People still don't get it. They hear a few ways which cannabis Helps us, however "if" people were properly Educated, we would all Demand Utilization. If we learned about how utilizing "was and is", our best option for a Healthy World, then we can make it happen.Our First Step is to help educate Each Other. Cannabis Cures People & Planet.
We could stop the DESTRUCTION of our planet and REVERSE the atmosphere and heal the soil and feed the PEOPLE, ECT. the most healthy substance known to MAN! Humans are Naturally Loving Creatures, it seems things have been backwards forever. What does make sense in our society? It only makes sense when we realize that the top officials almost everywhere have been "Paid Off".

Because the system is "Rigged", the Important Information is NOT relayed to the PUBLIC through the MEDIA! Life saving information is continually Suppressed by the "News" on TV, which is the Main Problem!
In just 1 single Day, we / USA could all be on the same page, IF only the news told the whole Truth about Cannabis.

"Money talks, pot walks" say the Lobbyists!
We all Need the knowledge of Sustainability so that WE may "Collectively'' Demand CHANGE!
Society is Rigged because nearly All Media is owned by the 6 biggest corporations that profit from our ignorance,...daily! They Only report what they want you/us to hear, and it's certainly not the whole TRUTH! "Half Truths" are even More Destructive for US.
The truth is if marijuana was utilized for its vast array of commercial products, it would create an industrial Rejuvenation for our country! Entrepreneurs have not been educated on the product potential of pot.

The super rich have conspired to spread misinformation about an extremely versatile plant that, if used properly, (properly Educated Citizens) would ruin their companies. Marijuana is very much a danger to the oil companies, alcohol, tobacco, plastic industries and a large number of chemical corporations.
Various big businesses, with plenty of dollars and influence, have suppressed the truth from the people. We are allowing them to kill our planet without our consent! Proof that the Earth is being poisoned is Obvious in the rise of Deaths by POLLUTION and it gets worse every day.

~  Pollution kills more people every year than wars, car accidents, and homicides combined. ~ Henry Ford Invented Cars Made from, and Ran On Wild Hemp Fuel. Henry Ford & Climate Change : August 13, 1941, Henry Ford's introduction of the Greenest, Healthiest & most practical automobile in history, made from and fueled by Hemp. This Amazing Car was 4.7 times better for the environment than Today's Electric Vehicles! ! !

Hemp was the reason "marijuana" was outlawed, absolutely nothing to do with "getting high" and nothing to do with any "harmful" effects on the mind and body, just the Opposite is now recognized as it is the Healthiest Vegetable on Earth.

Pot does NOT pose a threat to the general public, just the opposite! 1 out of 10 may become dependent but not addicted, rather mentally dependant, and the withdrawels would not make you rob a gas station.

Pot has the Healthiest Nutrients on Earth for all mammals! Eating it Fresh is best & non psychoactive (it has to heated above 200 degrees). If it is baked, then you must be careful how much, even a half a cookie could make a person with no tolerance, very sick, regulations allow info. & directions.

In Israel, the Ministry of Health’s Medical Cannabis Unit trains doctors so that they can prescribe medical pot for patients with 100 qualifying conditions. USA had the SAME prescriptions for hemp from 1850 until 1937 prohibition. So why is the endocannabinoid system Not Taught in Americas medical schools? When will the E.C.S. feature on OUR medical school curriculums!? 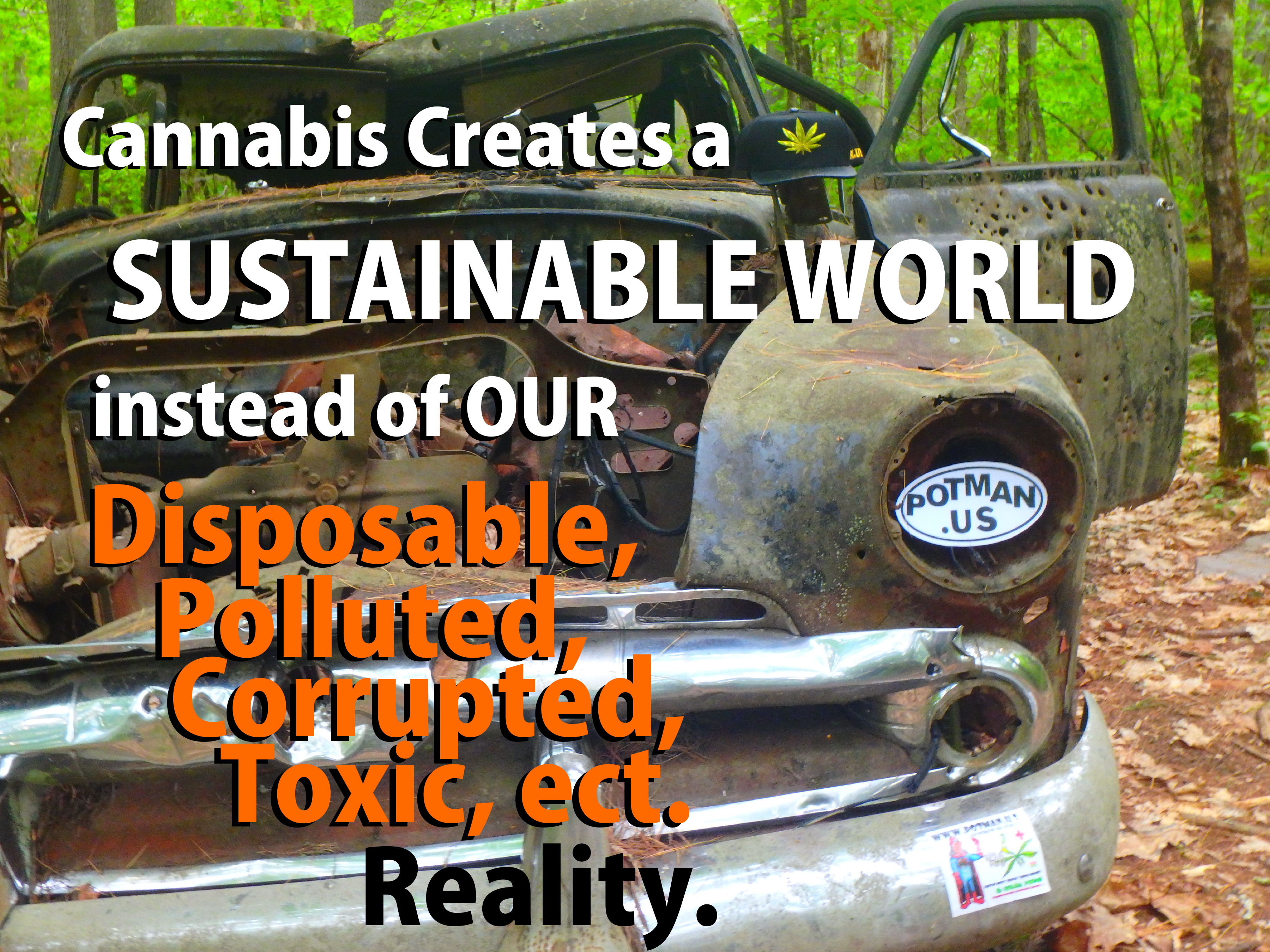 Back in 2013, David B. Allen MD commissioned a survey in which all the medical schools in the US were asked whether they included the ECS within their syllabus. Only 13% were found to teach it in any way, with Dr. Allen declaring that “research and education of medical students involving the ECS is being intentionally restricted by politics.” This finding sent shock waves through the medical cannabis community, with many wondering what hope there was for an integration of medical cannabis into the healthcare system if most health professionals were unaware of the physiological system underpinning its effectiveness. 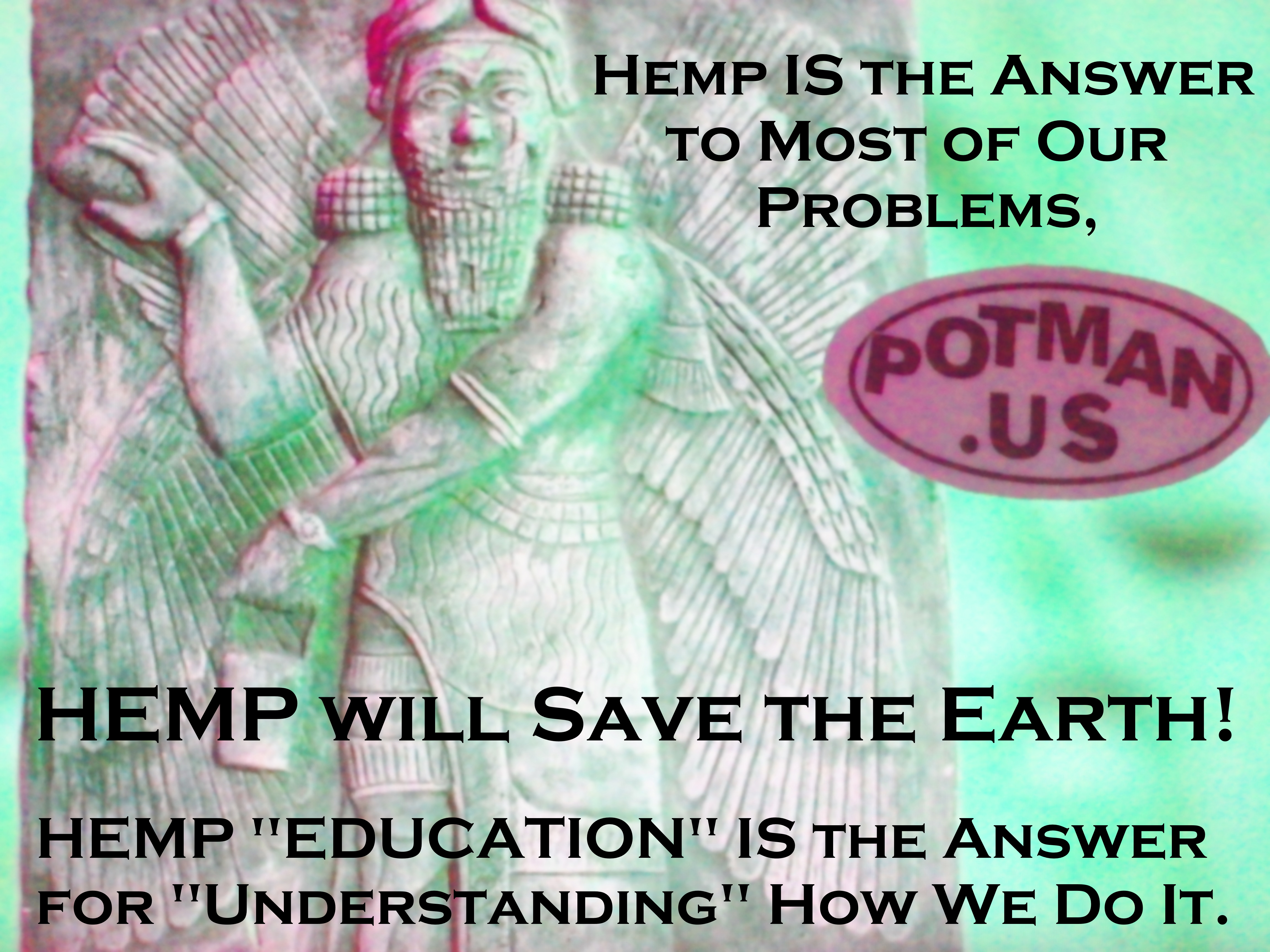 There really is massive proof that the suppression of medical cannabis represents the greatest failure of the institutions of a free society, medicine, journalism, science, and our fundamental values. America was great, it has gone downhill, Our "pride" is rightfully strong but that is now our weakness, we must recognize the corruption has infiltrated our top officials. Change never happens in politics, Change Only happens if we "Collectively" confront it , PEACEFULLY!

Written by Frank Altomari on 01 August 2019. Posted in The Story Behind The Art