It was never about "getting high", it was about getting HEMP! Every State (also every country) needs a Cannabis Upgrade! Humble Hemp is the #1 most Sustainable change we all can make, naturally. - PotMan : The average person has no idea we are destroying Everything instead of using Hemp in 60k More Sustainable, better ways! 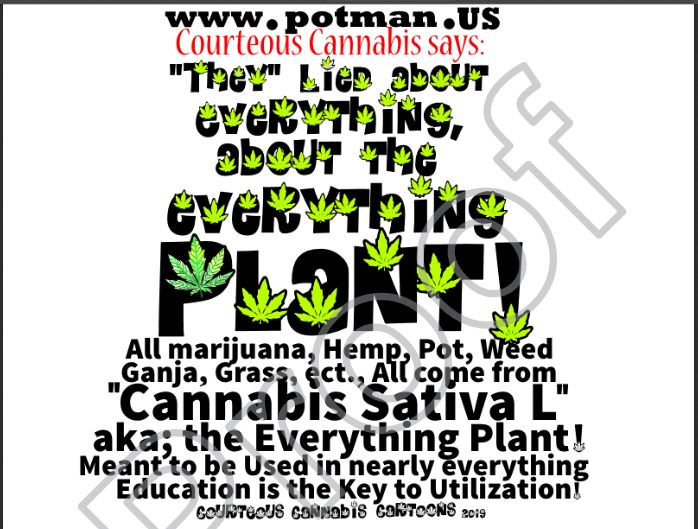 Apparently, Our government institutions Stopped Caring around 50 years ago, It has been an uphill struggle to get anything Good done in Our country!
USA always stood for the Greatest ideals but How do We represent Better options if We are Unaware?! What if I told you that the number one single Healthiest FOOD on Earth was Also already used successfully as the ultimate, original Car FUEL!!!
That's right, the best Fuel also happens to be Human beings Healthiest Foods!!! Did you know that hemp Seed Oil makes the Finest Lubricant on Earth, that's right, superior to anything else! Hempcrete Structures (up to 40 stories tall) don't Burn and are more Energy Efficient!
The Strongest soft Fiber on Earth, thanks to Our Ancestors who created Hemp by cultivating Cannabis for the last 12k years. Hemp was Supposed to be Utilized in 50k different ways (popular mechanics 1941) but instead went into oblivion just like Fords Car!
Our History and Our Media dictate what We Believe. Our present Greenhouse effect (global warming) is caused mostly by positive carbon industrial emissions, from Manufacturing to Fuel!

Henry Ford was way ahead of his time when he manufactured carbon Negative car parts...and then there's the 1941 Hemp Car, the world's Cleanest and Greenest Car ever made, so far, 4.7 times Better for the Earth than Today's Electric Cars!
Henry's vision was to have families live on & Farm 5 Acres, off the grid, hardly any Pollution, and Sell the basic Plants including Hemp to all the corporations to manufacture textiles and Nearly Everything else! Ford also had 25k people running machines on hemp oil.
Actually, Ford was Not ahead of his time, he was Right on Time! All Life on Earth suffers now from Henry Ford's "Hemp Car" being Omitted from Our History!

Altomari Art; Fine Artist and Photographer. Created the Earth's Most Useful cartoon characters that Represent the Ultimate Prosperity, Sustainability and the Most Beneficial Health to Our Planet and All inhabitants.
From replacing Nuclear power plants and Car Fuel to providing the Healthiest Foods on Earth.
All You/Anyone Need to do is Read online, "The Emperor Wears No Clothes" by Jack Herer and then Our Environmental "Picture" becomes clear!
Jack ran for President Twice in the 1990's and so much more that we never heard about. I myself uncovered the facts about Hemp Fuel being superior to gasoline in every way and that it would only cost $200. to convert our cars to run on hemp fuel and that's just the beginning.
WE should be paying .25 cents per Gallon of Fuel for Our cars and Growing the fuel itself, Greatly Helps Our Planet!!

Courteous Cannabis says: Hemp Seeds are the single "Healthiest Food" on Earth and Also the "Best Lubricant" on Earth, better than Petroleum in its Performance and Production! All the Proof is found in Henry Ford's 1941 Hemp Car, Read www . potman . US - 1941 Hemp Car Also, Eating Fresh Plant flowers are the Healthiest substance/fruit or vegetable on Earth for "Strengthening Our Immune System". Hemp will Never get you high and regular pot will Never get you high when Eaten Fresh but does More for Your Immune System than Anything Else! What a Misled World, Only Unity (People Demanding Utilization) Can make Any Significant Changes, "Education means Everything". Now that you Know this Information, let go of misguided loyalty to a now Disappointing System. Cannabis Unity is Our Solution.

Grows like a weed in your backyard without pesticides or herbicides. No need for Insulation or dry wall or Paint! Before prohibition, most products were made from hemp, including all Paints & Lubricants! We (every nation) have to plant hemp everywhere a.s.a.p. for Ourselves with the byproduct bveing Restoring Our Atmosphere.

The "Everything Plant" Cannabis, Heals the Environment (especially toxicity & radiation) where it grows, so add another reason George Washington was right when he said; "plant it everywhere"! My research shows pot was the original lamp oil, fuel, far superior paper, textiles, ect. The Earth is loosing all important Natural Resources & being polluted from every angle....NEEDLESSLY! 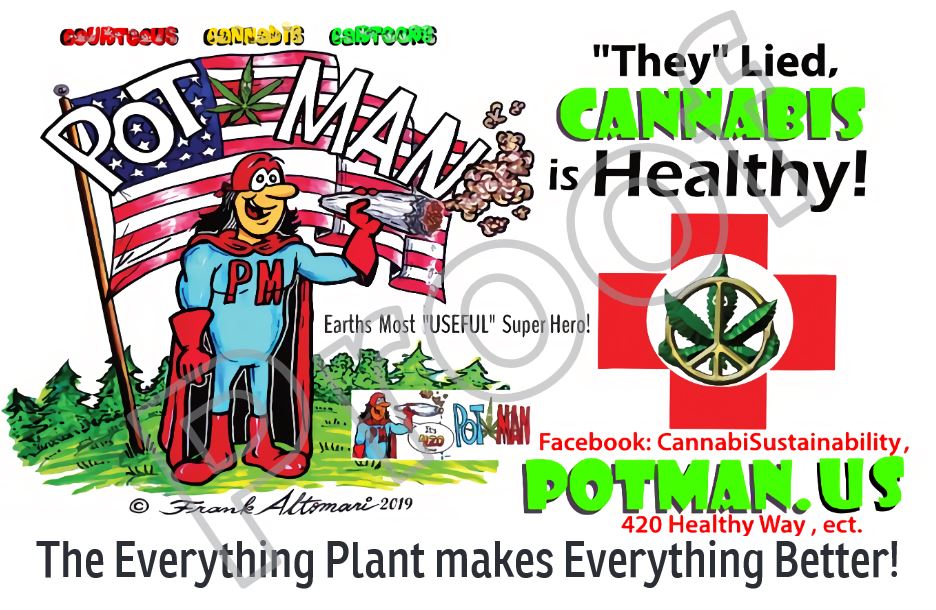 We need to be Educated to be aware of the Truth to be able to UNITE! Peacefully.

The message behind my Painting "CannabiSolutions" far exceeds the artwork itself. Did U Know?; Henry Ford & Rudolf Diesel invented the car Engine to Run on Alcohol (hence alcohol prohibition in the 1920's) then, wanted to Run their engines on Hemp bio-fuels, hence, "1937 marijuana prohibition"! "They", murdered R. Diesel and slandered H. Ford, all to Suppress Knowledge of "NATURAL ENERGY SOLUTIONS (NES)! Ford had 25% of the mid-west using his biofuel before it was Outlawed! Henry Fords Car/Village would have Progressed into All man-made-materials for the sake of Man & Planet! It's called "SUSTAINABILITY"! This is the single biggest problem where Humanity "Went Wrong"! Fords Carbon Positive Products were ahead of its time. 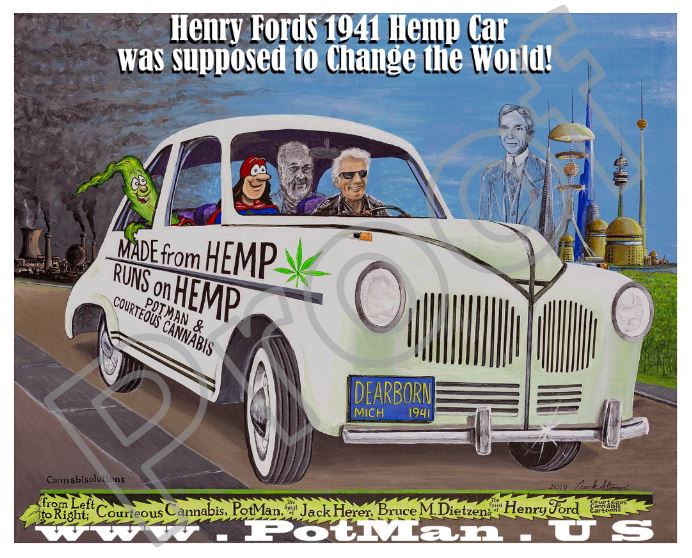 Global Leaders in the fields of medicine, law, agriculture and politics share their unique expertise as they explain the complex relationship between bacteria, soil, and your body. Discover how Big Agriculture and companies like Monsanto have drastically influenced agriculture in America, leading to corrupt, inhumane and toxic farming practices.

Our Earth is Dying, Our system is broken when life saving knowledge is being suppressed from most of our Media/Gov. We have been Misled, 9 out of 10 people will never become addicted to cannabis/pot - 90% need education about "Pot Sustainability", if the people were Educated, we could demand CHANGE!
Be Grateful for your Life Saving Pot Knowledge! Help others and Feel even Better & Healthier!

Leveling forests and taking things out from beneath the ground, using up Earths Precious Natural Resources while Polluting Air, Water & Ground, instead of Utilizing Cannabis, that's what's destroying the earth & causing the green house effect. Farmers & Everyone else could literally save the earth by growing HEMP.

The Earth will always survive, however, we as a species and just about every other species on the planet will not survive if we continue on the path that we are now on. And that's not my opinion, that's what the international panel of climate control has stated. - Wear&Share! 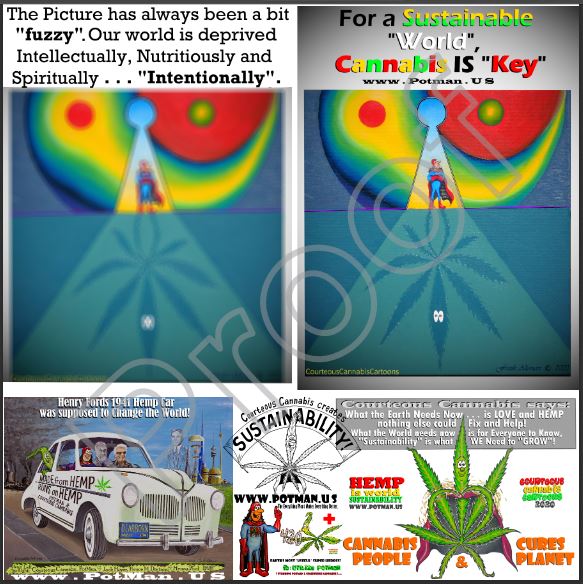 We need to be Educated to be aware of the Truth to be able to UNITE! Peacefully.
Help PotMan & Courteous Cannabis bring Awareness thru Art!  ~ Wear&Share4Awareness! ~

Written by Frank Altomari on 03 August 2019. Posted in The Story Behind The Art