50,000+ more Sustainable improvements IF we utilized cannabis,...
"the Everything Plant".

We live in a Disposable Society/World (for their Profit), let's make it a SUSTAINABLE Society once Again Utilizing Pot, aka: "Cannabis".
Cannabis was/will-be Our Best Hope, Biologically & Environmentally.

5/24/2019 -  For over 80 years now, "Outdated" materials, petroleum, fuels and Energies, combined with Flawed Production from Industries Spreading Pollution (pollution creates disease) accross the planet. WE have been Allowing flawed "Everything" instead of "Utilizing Cannabis in Everything".
All "they" care about is "profit". Allow Sustainability and PotMan to be Heard! Let's All Demand CHANGE! 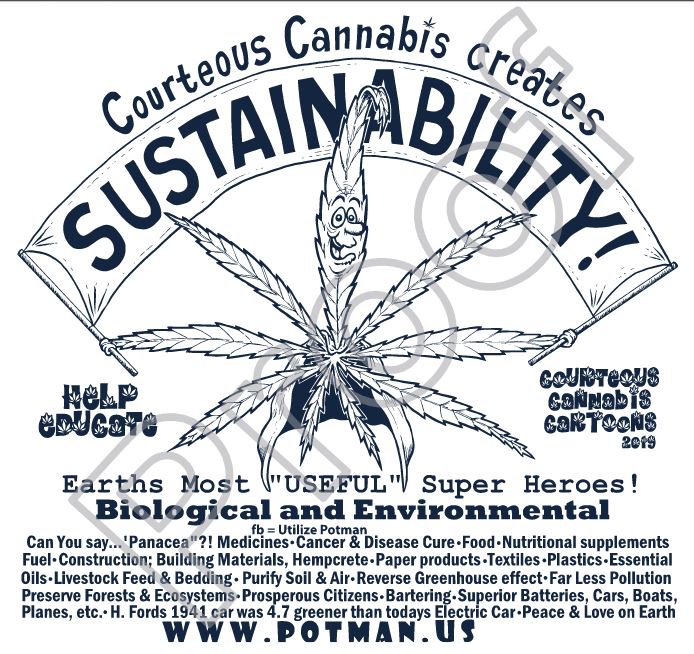 No More Cutting Trees, Start Using Cannabis PLEASE!
An Educated Human Must Agree, Utilize Cannabis in Everything, starting with the TREE!
Houses Don't BURN DOWN , or any structure that is made from HEMPCRETE! No Toxic Smoke Pollution that effects everyone! We could be Saving Trees while "the Plant" adds O2, eats up CO2       and PURIFIES the Environment where it grows. Strongest and Greenest Building Material!
Homes would benefit from; Fire resistant - impossible to burn - Better Insulation (heating & cooling Costs), Bug Proof - no Harmful PESTICIDES - Water Resistant, MOLD Illness caused by water leaks. - STRONGEST material on Earth! No need for insulation, dry wall or paint. Grows Free, just add Lime. Structures made from Hempcrete could last THOUSANDS of YEARS! The Oldest hempcrete structures are approx.1,500 years old and counting!

1)- Hemp may be Used as our worlds premier Food Source, as it is our most Nutritious Vegetable.
2)- Hemp requires Half the Water that cotton needs with stronger, softer clothes. - Hemp IS the Strongest soft Fiber on Earth!
3)- 1 acre of Hemp produces the same amount of Paper as 4.1 acres of Trees, while producing superior Paper products.
4)- 1 acre of Hemp produces more Oxygen than 25 acres of Forest. Cannabis Also Purifies its environment where it grows.
5)- Hemp can replace Petroleum , fossil fuels - Henry Fords 1941 Hemp Car was 4.7 Better for the Earth than TODAYS ELECTRIC CAR. - prob. 50 times better than Petroleum made & run Cars. Not only did the HempCar Run on hemp Fuel, it was built mostly with hemp. His hemp materials he used to build his Car were 10 times Stronger and Lighter than steel, half the weight of other cars.
6)- Nearly all Medicines are Flawed, cannabis is a natural part our Physiology, all mammals have E.C.S., we co-evolved eating it fresh (no high) nothing western Medicine can create, fits our bodies receptors as perfectly as cannabis cannabinoids.
7)- There are at least 30,000 toxic sites just in the U.S. where hemp should be planted to absorb heavy metals, toxicity and radiation. Hemp used to grow Everywhere from pole to pole, unfortunately it has been eradicated over the last hundred years.
8)- All Plastics could be made from Hemp, sustainable to biodegradable and without Leching petroleum Toxins lasting eons.
9)- Hempcrete is the ultimate building material ; Strongest,1/6 the weight of concrete, mold, fire, water, Resistant, breathable, best hot & cold insulator, ect. The implications are staggering, just think about the Health, Medical, Economic, Environmental  benefits!
10)- Bio-Mass Energy could replace Nuclear & Coal Energies. The more we utilize everywhere else, the less Nuclear & Coal.
11)- hemp Agriculture does NOT require Pesticides and Herbicides as well as tons of Chemicals that are Poisonous.
12)- Seed Oil almost exactly Matches Human Blood Plasma.
13)- Replacement for Wood and Fibers as a source of raw material for the Wood Pulp industry.
Ect., ect. - 60,000+ Environmental & Biologic superior improvements with cannabis. 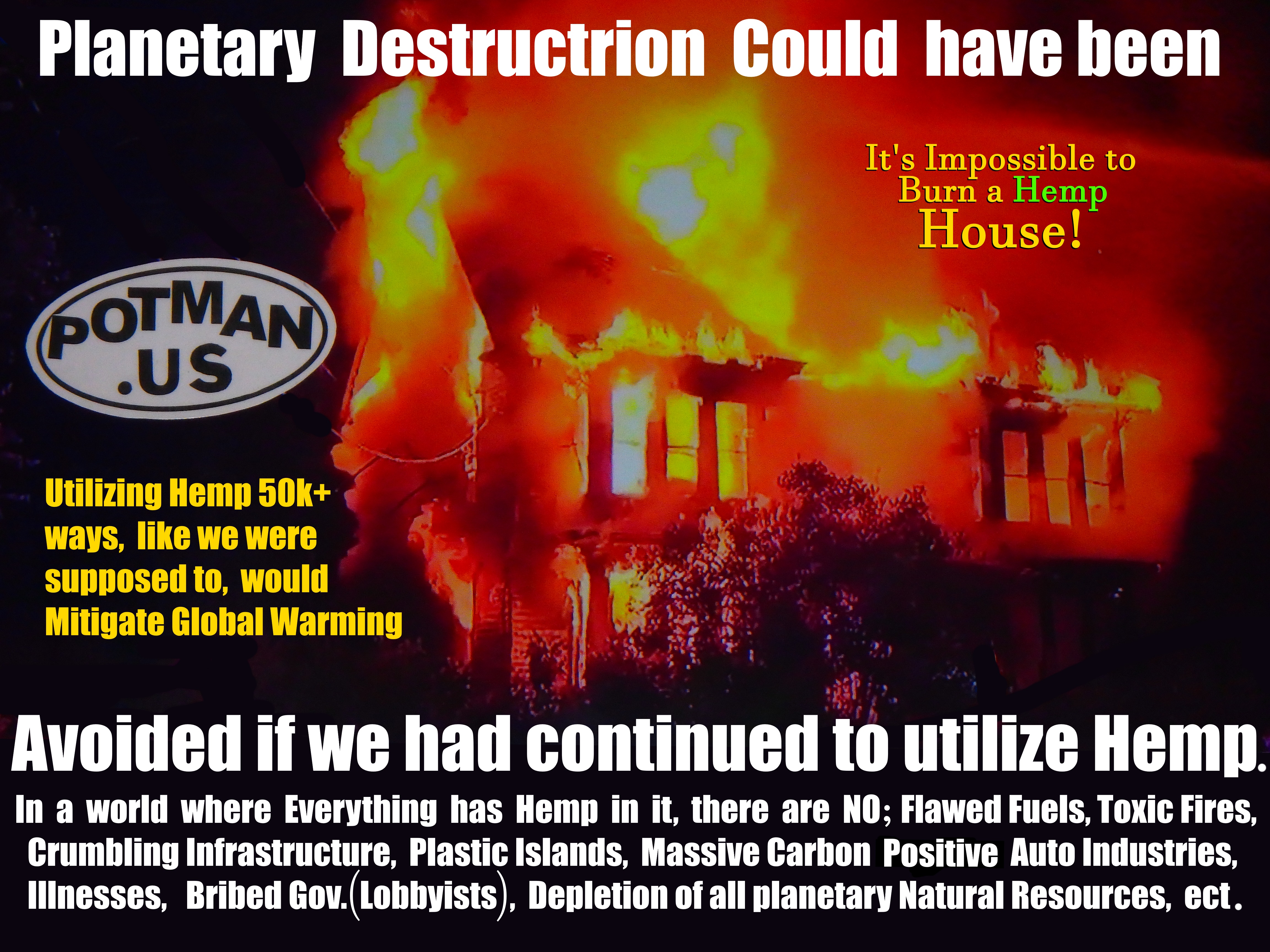 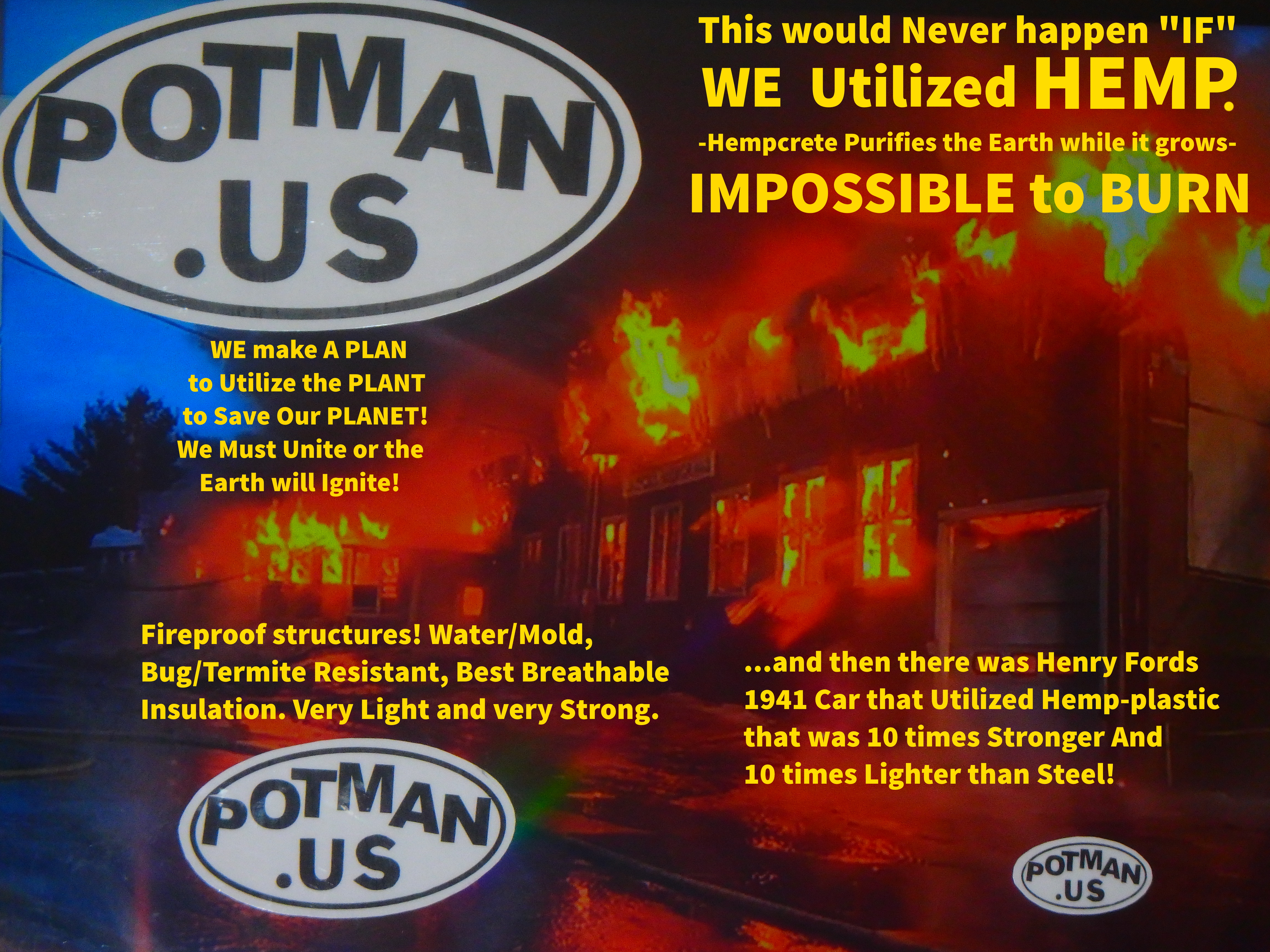 -- RED ALERT - Ignorance is no longer bliss,...it is fatal. Pollution is Earths #1 Killer of all Living things.
Q) What's the rush? A) critical stage, waiting for everyone to Educate themselves.

We are Poisoning the Planet with Flawed Energies and Fuels and that Creates Disease. Pollution creates DISEASE while also destroying; Land, Water & Air! We Are killing our Earth, at least all inhabitants. 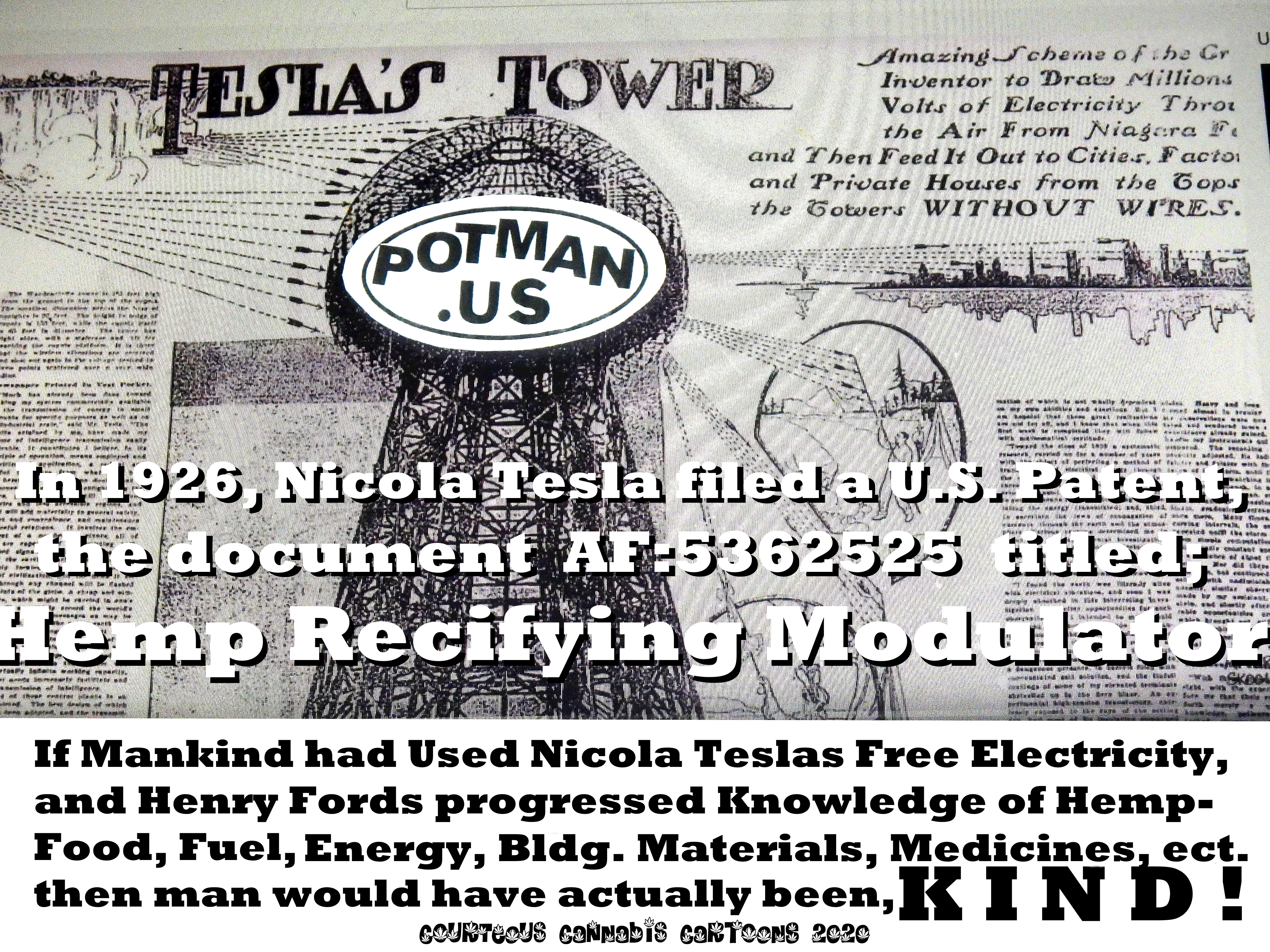 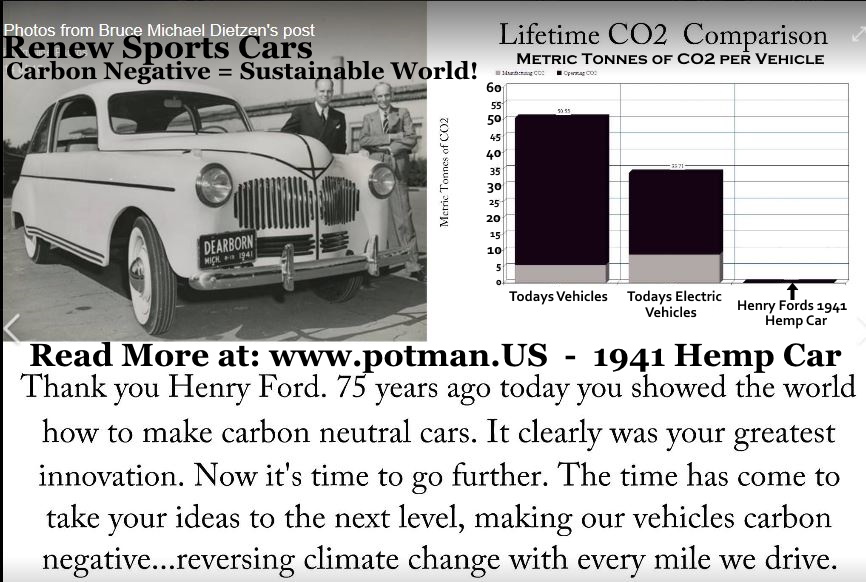 Our present Greenhouse effect (global warming) is caused mostly by positive carbon industrial emissions, from Manufacturing to Fuel!
Henry Ford was way ahead of his time when he manufactured carbon Negative car parts...and then there's the 1941 Hemp Car, the world's Cleanest and Greenest Car ever made, so far, 4.7 times Better for the Earth than Today's Electric Cars!
Henry's vision was to have families live on & Farm 5 Acres, off the grid, hardly any Pollution, and Sell the basic Plants including Hemp to all the corporations to manufacture textiles and Nearly Everything else! Ford also had 25k people running machines on hemp oil.
Actually, Ford was Not ahead of his time, he was Right on Time! All Life on Earth suffers now from Henry Ford's "Hemp Car" being Omitted from Our History!

Altomari Art; Fine Artist and Photographer. Created the Earth's Most Useful cartoon characters that Represent the Ultimate Prosperity, Sustainability and the Most Beneficial Health to Our Planet and All inhabitants.
From replacing Nuclear power plants and Car Fuel to providing the Healthiest Foods on Earth.
All You/Anyone Need to do is Read online, "The Emperor Wears No Clothes" by Jack Herer and then Our Environmental "Picture" becomes clear!
Jack ran for President Twice in the 1990's and so much more that we never heard about. I myself uncovered the facts about Hemp Fuel being superior to gasoline in every way and that it would only cost $200. to convert our cars to run on hemp fuel and that's just the beginning.
WE should be paying .25 cents per Gallon of Fuel for Our cars and Growing the fuel itself, Greatly Helps Our Planet!!

Courteous Cannabis says: Hemp Seeds are the single Healthiest Food on Earth and Also, the Best Lubricant on Earth, better than Petroleum, just Look at Henry Ford's 1941 Hemp Car !
Eating Fresh Plant flowers are the Healthiest substance/fruit or vegetable on Earth for Our Immune System. Hemp will Never get you high and regular pot will Never get you high when Eaten Fresh! What a Misled World!

Not only did "they" Suppress the Inventors and their inventions, but the Important Information for US to make decisions. The big $ that manipulates the worlds Governments, also manipulate the MEDIA. The Earth has been continually breaking hot weather Records and Unity is always our solution.

The fact that we Use Trees and Fossil Fuels are Criminal. Using Trees and Petroleum creates environmental destruction, yet it continues every day. Our planet should Still be Healthy, man made (produced) energies & fuels Should all have been made with Plant Materials. If we Utilized Cannabis, it would do a Better job with Far Less Pollution. Not only does Cannabis work Better for energy uses, it also Purifies the environment where it grows! It's a no-brainer (again).

There are actually 60,000 Improvements if we Utilized it in our industries & homes. Hemp Creates Environmental prosperity as well as Biologic, the Endo-cannabinoid system is vital for good health and yet the E.C.S. is still NOT taught in medical schools because of Restricted Politics!

We were supposed to follow Henrys "village" plan to Grow our own; Food, Fuel, Energy, Medicines, Industrial Material, Bartering, Etc., however big $ had other Plans. Instead of poisoning our property, we should be growing food. Ford wanted US to grow & Sell to all Industries. Plant material in all products creates Carbon Neutrality to Negative!
Our world should have evolved Completely Different IF the inventions from "Nicola Tesla and Henry Ford" had Never Been Suppressed! Did you know that in 1926, Tesla filed document AF:5362525 to the U.S. Patent office with the title; Hemp Modulator and Also stated that Hemp will replace Petroleum and Medicines! 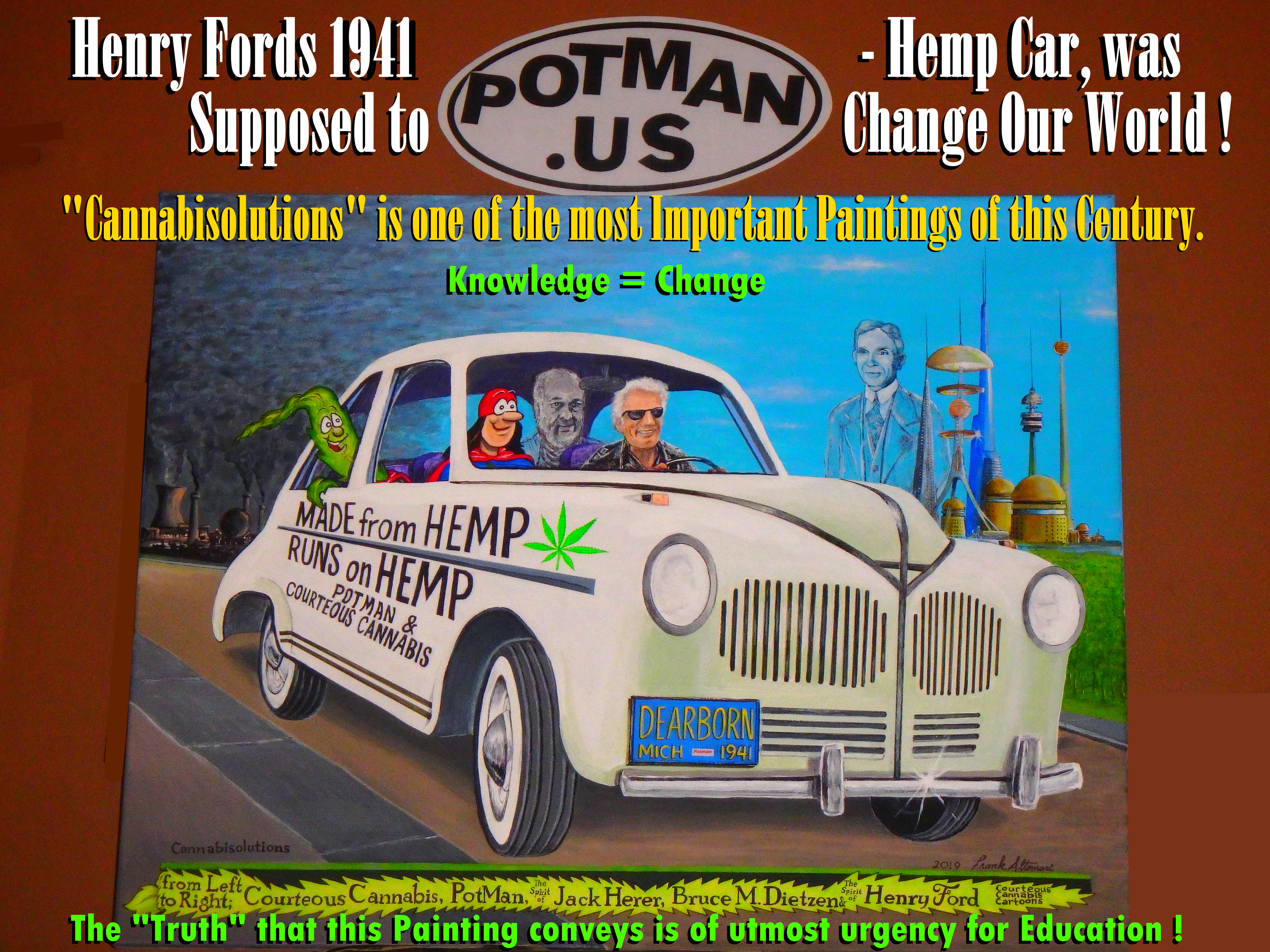 .CannabiSolution:  2019,  For over 80 years, the worlds greatest country ( & citizens) has been misled by the corruption. All populations in most countries are All innocent Victims.
Utilizing Cannabis would Eliminate Most of Our Pain and Suffering while producing Environmental Healing! The Reason Why we allow this, is because we are Not  Told/Educated, so "Collectively" we are Not on the "same page"!
The power of "knowledge" would indeed also produce "Unity". The Cannabis Plant is Obviously the Most Powerful Plant on Earth and most corporations are Not Utilizing it in 60,000 superior products/ uses.
For more information on Carbon Negative Fiber, visit carbonnegativefiber.com.

1 out of 20 Americans Died from cancer before 1937 Prohibition, since then, cancer has Steadily Risen to todays 1 out of 2 !

It grew everywhere until the last 100 yrs. Hemp has Nothing to do with "getting high", it was made Illegal to (suppressing N.E.S.). All forms of cannabis ( marijuana, hemp, ect.) come from ONE SINGLE PLANT, "Cannabis Sativa L", the Most Productive on earth.

They didn't want US to know, that we Could Be Much HEALTHIER, Self Sufficient & Grow All the Variations for Production & Sale for All the industries to Buy it. All this means, is that IF it were grown for nearly everything, (like it should have) the Earth would be Much Healthier. Earths Temperature has been Steadily RISING! Red-Alert! Our House Is On Fire! This will only end well if we start planting HEMP everywhere!

Cannabis is really all about "Sustainability". Cannabis could potentially create World Peace because of it's Sustainable Implications. Hemp can be used for just about Everything and do a Better job! Here are a few of the 60,000 ways Pot is Superior for Our well being and the Earths!   fb= Utilize Potman, CannabiSustainability, ect. 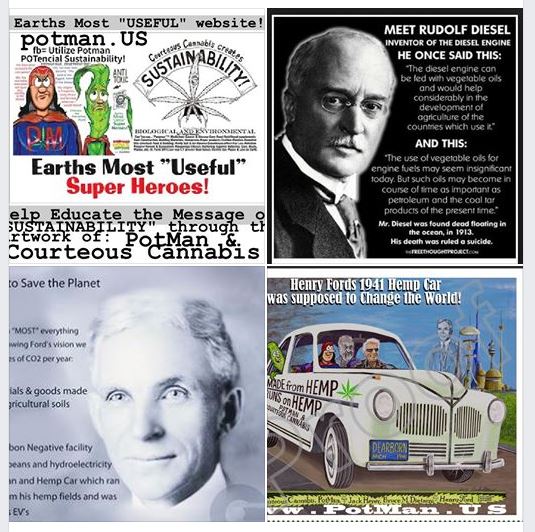 Written by Frank Altomari on 30 July 2019. Posted in The Story Behind The Art