If YOU are skeptical about the Information You are reading on this website,...
...just Read the one and only best resource for Cannabis information; "The Emperor Wears No Clothes"! This Book will be in it's 15th edition, already selling hundreds of thousands of copies. It is available to read online and has all the proof of resources and references.
- www.JackHererFoundation.org

Jack Herer, Rick Simpson, PotMan & Courteous Cannabis are Super Heroes!
Jack would say, "You Can't Beat A Fact"! ...and that's why WE all should Advocate.

Everyone must Read "The Emperor Wears No Clothes" by Jack Herer
First we must have an educated society before WE may move forward. Knowledge is Key. Nearly All Media is controlled for "Their Interests", Not Yours! They Manipulate us all! "Knowledge" Brings the Power of Change!

None of Prohibition is True,
All of PotMan is Real.

2019 - First of all, Everyone should Read the Book - "The Emperor Wears No Clothes" -  by "Jack Herer". Available to read for free online at: jack herer.com.
Most of US have no idea that Jack ran for president twice in the 90's! After I started to educate myself, Jack became my greatest role model. Jack Herer and Rick Simpson are the 2 Humaitarians Responsible for our current Cannabis  Resurgence!

Jacks Facts: Remember Everyone, We Have The Truth On OUR Side, and ya can't beat a FACT! We will always win.
An except from Earths most Useful website; "potman.US" and before that, "The Emperor Wears No Clothes", by Jack Herer:

"If All fossil Fuels & their Derivatives, as well as as Trees for paper (& now cardboard) and Construction Materials were "Banned" in order to Save the planet, reverse the Greenhouse Effect and Stop Deforestation; then there is only 1 known annually renewable, natural resource that is Capable of providing the overall majority of the worlds; paper, plastics & textiles; meet All of the worlds transportation, industrial and home energy Needs, provide about 30-70% of the worlds medicines, WHILE; reducing pollution, rebuilding the soil, and cleaning the atmosphere, providing clean oxygen, all at the same time! ...and that substance is the same one that has done it before, for the last 5 to 10 thousand years, until about 130 years ago". 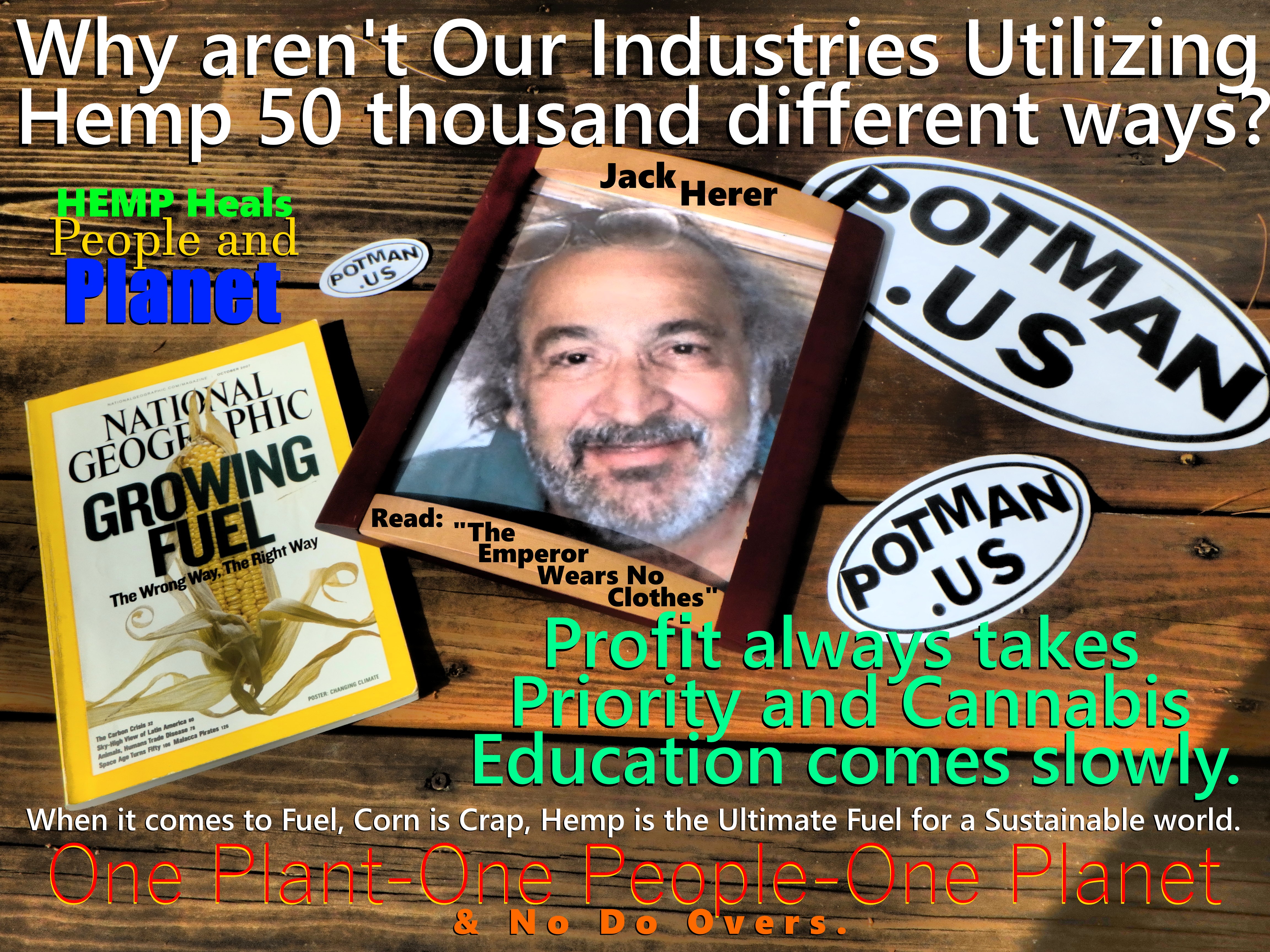 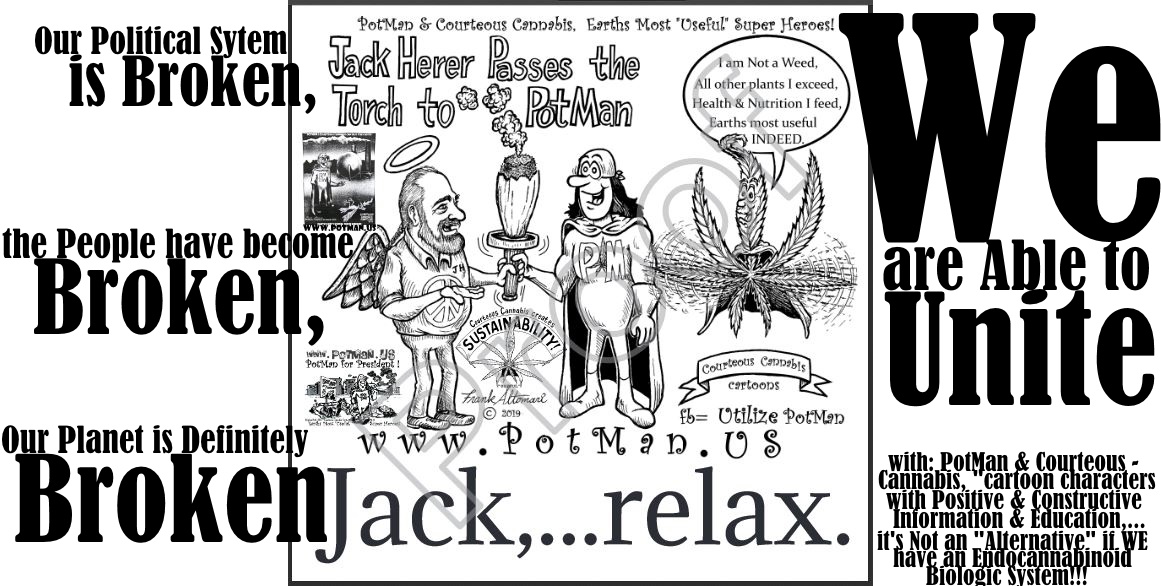 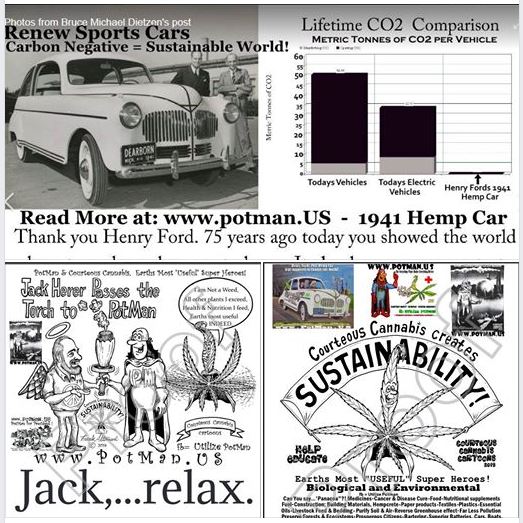 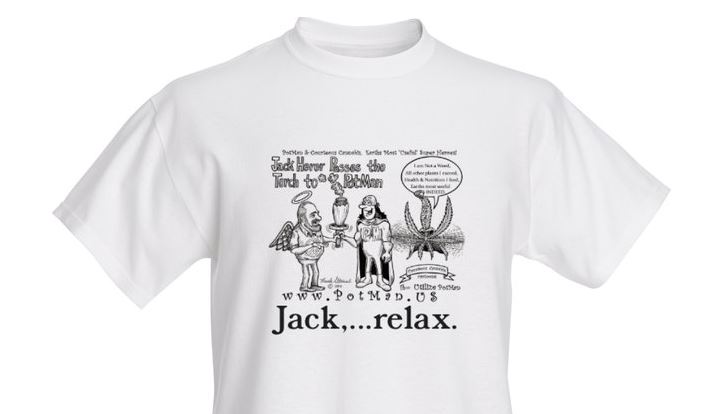 Presently, there is no artwork with Rick Simpson, but you can plan on seeing them all together soon, doing Good.

Rick Simpson Educated Me Through social media & Youtube!
My whole life, I thought pot was badfor you. It took until 2012 for me to Learn the Truth, Rick, informing everyone since he found out, in 2003.
He then Healed 5k, out of 5k people.

Thank God for Rick Simpson, who re-established Cannabis Oil success in 2003! After watching him on Youtube, it was a New Beginning! I was blown away by finding out what Cannabis Can Do! Watching the Rick Simpson Videos on Youtube was my Awakening to a legitimate Cancer Cure.
Continued Research proved what massive Potencial the plant has Biologically and Environmentally.
Rick Simpson says, "Everyone ought to have a Gallon of R.S.O. on hand".
- Humanitarian Potencial of the "Everything Plant" Will "Unite Everyone". 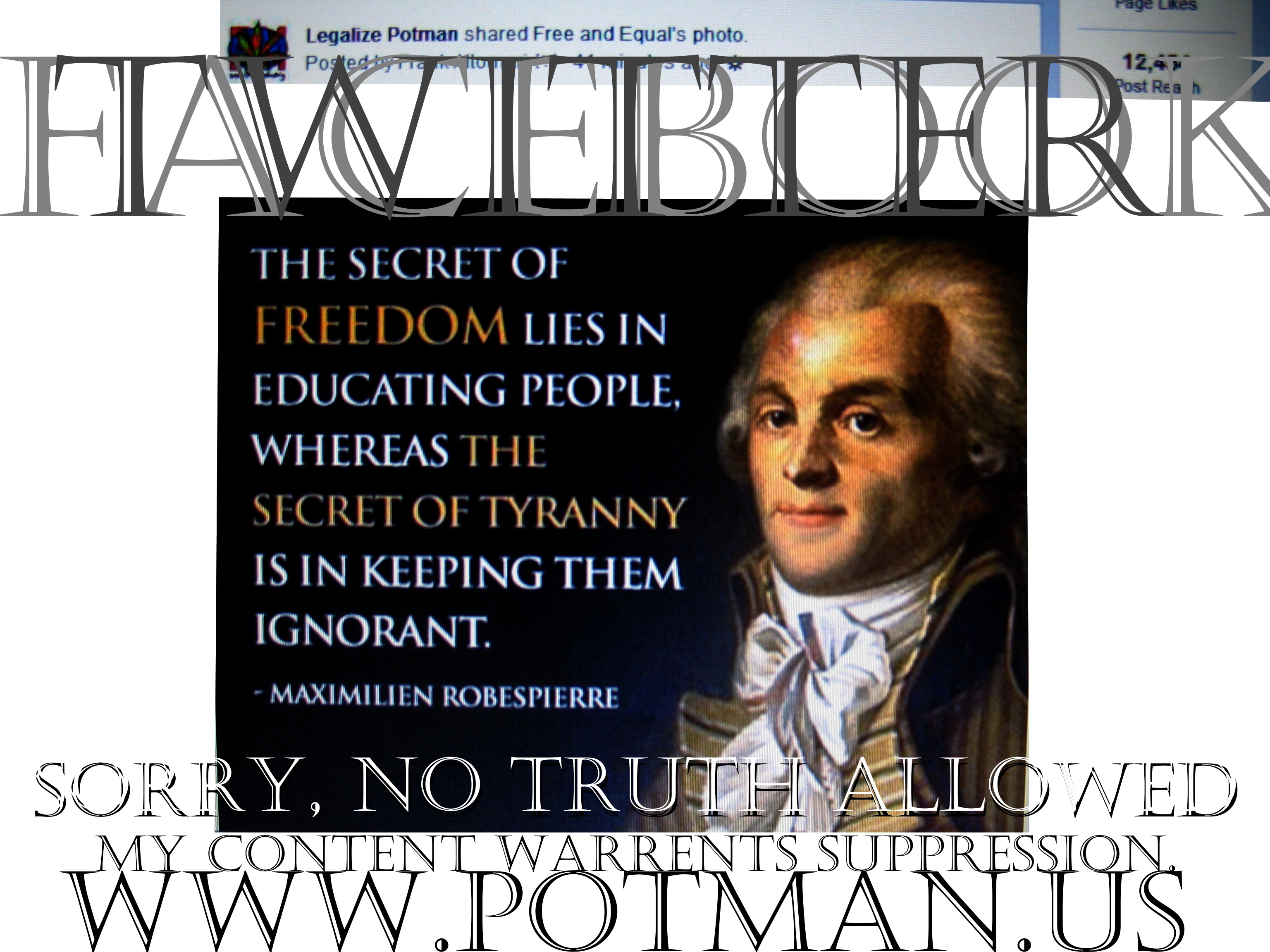 PotMan wants to Help Educate so We may Heal Ourselves and the Earth.
When I was 16, got a job at a gas station and then I created the cartoon character "PotMan"(P.M.). However, in the 1980's, President Reagans; War on Drugs, "Just Say No", campaign was "everywhere"!
President Nixon originally Started the War on Pot", it was Reagan who re-Ignited the War.
President Reagan actually said; "Marijuana is probably the Most DANGEROUS Drug to the United States"!...so this "war on pot", and the fact that my Grandfather was a Grand Marshall Freemason, added to my Moral & Ethical Obligation, "Not to Glorify Pot" (with P.M.)! So, I put P.M. away in my "art closet".
I had no clue about "The Everything Plant"!  Jack Herer had been Advocating about the Benefits of Cannabis since the 1980"s (Rick Simpson since 2003)!
Over the coarse of my life, I have ceated nearly every kind of Artwork for clients.
It wasn't until 2012 when I pulled P.M. from the closet, started a fb page which allowed me become "Educated through Social Media".
With new found information & inspiration, I have been researching & educating ever since. Once people understand what this plant may do, we ALL will be "on-board"!
It All fits together perfect! We are continuously being Lied to by the Media, they do Not tell US the whole truth to protect their corporate interests. "They Lied about Everything, about the "Everything Plant"! Support Life, Advocate for Cannabis.

Study contradicts some prior marijuana research!!!

EDITOR’S NOTE: A clarification of the study referenced below was issued because of controversy surrounding the findings. The original article reported there was not a statistically significant difference among four groups of males who exhibited varying patterns of teenage marijuana use in relation to several physical and mental health issues later in life, including psychotic disorders. Because of the controversy, the authors were asked to conduct a different set of analyses that compared teens who were infrequent or nonusers of marijuana to a combined group of teens who used marijuana regularly over multiple years. Although these supplemental analyses indicated that teens who engaged in frequent marijuana use had a higher probability of meeting criteria for a psychotic disorder than infrequent/nonusers by their 30s, this difference did not reach statistical significance using a two-tailed test (p=.09).

WASHINGTON — Chronic marijuana use by teenage boys does not appear to be linked to later physical or mental health issues such as depression, psychotic symptoms or asthma, according to a study published by the American Psychological Association.

Researchers from the University of Pittsburgh Medical Center and Rutgers University tracked 408 males from adolescence into their mid-30s for the study, which was published in Psychology of Addictive Behaviors®.

“What we found was a little surprising,” said lead researcher Jordan Bechtold, PhD, a psychology research fellow at the University of Pittsburgh Medical Center. “There were no differences in any of the mental or physical health outcomes that we measured regardless of the amount or frequency of marijuana used during adolescence.”

The research was an offshoot of the Pittsburgh Youth Study, which began tracking 14-year-old male Pittsburgh public school students in the late 1980s to analyze various health and social issues. For 12 years, participants were surveyed annually or semiannually, and a follow-up survey was conducted with 408 participants in 2009-10 when they were 36 years old. The study sample was 54 percent black, 42 percent white and 4 percent other races or ethnicities. There were no differences in the findings based on race or ethnicity.

Participants were divided into four groups based on their reported marijuana use: low or non-users (46 percent); early chronic users (22 percent); participants who only smoked marijuana during adolescence (11 percent); and those who began using marijuana later in their teen years and continued using the drug (21 percent). Early chronic users reported much higher marijuana use, which rapidly increased during their teens to a peak of more than 200 days per year on average when they were 22 years old. Their marijuana use then declined somewhat as they got older.

The researchers controlled for other factors that could have influenced the findings, including cigarette smoking, other illicit drug use, and participants’ access to health insurance. Since the study included only males, there were no findings or conclusions about women. Relatively few participants had psychotic symptoms, according to the study.

“We wanted to help inform the debate about legalization of marijuana, but it’s a very complicated issue and one study should not be taken in isolation,” Bechtold said.

Jordan Bechtold can be contacted by This email address is being protected from spambots. You need JavaScript enabled to view it. or by phone at (949) 291-7520.

The American Psychological Association, in Washington, D.C., is the largest scientific and professional organization representing psychology in the United States. APA's membership includes more than 122,500 researchers, educators, clinicians, consultants and students. Through its divisions in 54 subfields of psychology and affiliations with 60 state, territorial and Canadian provincial associations, APA works to advance the creation, communication and application of psychological knowledge to benefit society and improve people's lives.

Pot Smokers Live Longer and statistics saw 63% Less head, neck & throat Cancers with heavy smokers.
Spiritual awakening may be painful emotionally, because we shed away many of the constructs, beliefs, patterns  "inner and outer"  that we had surrounded ourselves with.
Many of these constructs are not aligned with our True Spiritual Nature "T.S.N." and do us more harm than good. But we were convinced otherwise. We were positively sure we needed them to survive, identify with, to thrive, and to feel good. They deal with anything and everything in our lives, big and small, and are often things we hold very dear.
You may not be completely aware of what and how they work. Yet spiritual awakening is precisely about becoming aware of such constructs, and liberating you from them, yet you Had Believed you needed them there. Imagine "New Possibilities with Good Health and Environment".
Therefore, as these constructs are challenged - and sometimes ripped off - the process can be painful. Particularly so when we resist it. Yet the process needs to move forward, because your own spiritual desire for it, for freedom, for peace, for healing, surpassed your clinginess to the constructs that hold you prisoner. Imagine "New Possibilities with Good Health and Environment".

Another reference source is " www.Hemp-Hippo.com "

Written by Frank Altomari on 31 July 2019. Posted in The Story Behind The Art