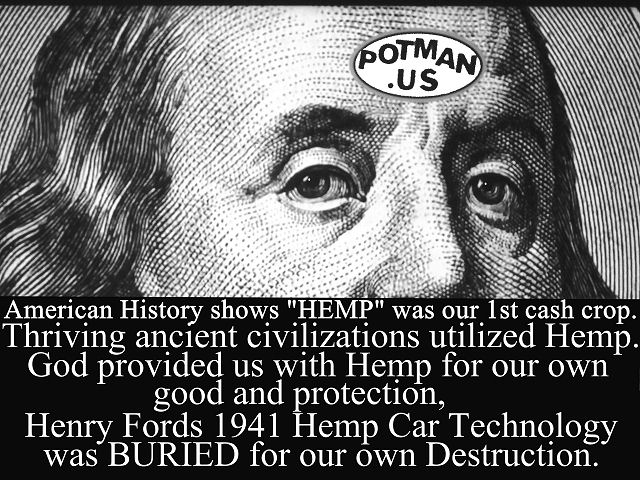 You know, "IF" we had only used Henry Fords "Hemp Plastic", used in his 1941 hemp Car, 12 times Stronger & Lighter than Steel, we would Not be so Disfunctional and Deadly!!!
Our world is made Not to Last Long, to Break and to Leech off it's TOXIC ingredients as is degrades!  Countless Products which include Disposable ones, that make up Our "norm", also creates a Non Sustainable World.
Bridges Built with Hemp would last for thousands of yrs. showing US we are living in an Intentionally Flawed world.
We were on the right track until 1937 prohibition. We allowed People & Planet to become Toxic because we didn't utilize the Non-Toxic Plant! Cannabis IS the Answer! Don't believe me? Just Read 1941 Hemp Car on this website.

One of USA's most misunderstood aspects of Hemp, is How it could create a Sustainable, Prosperous Society and World. Media brainwashing since 1937, has created our national & worldly misperceptions of the misunderstood Cannabis Plant.
Proper Knowledge surrounding the Facts about Our American History show that Hemp was "Americas Fist Cash Crop and Hemp Helped Build Our Nation"!
England had passed Laws to have all 13 Colonies grow Hemp (before the American Revolution). Hemp was so important that the Colonists used it as "Money"! That's right, legal tender, same as Cash, you could even Pay your Taxes with Hemp! It was a normal way of life for our Forefathers to Grow Hemp for Business transactions and Bartering.
For the majority of US, it's still unclear for what particular uses our Founding Fathers Utilized the hemp plant. We now know of the many, more sustainable uses Our Fore Fathers constructed. Little did they know, their Culture of Utilizing Hemp actually Created more "Sustainability" than Our "Modern" Industries and just about Everything Else in Modern Times.
165+ years later, Henry Ford created Village with a lifestyle that wasn't much different! Utilizing Hemp, Fords Village had 25k+ Farmers Utilizing Fuels and his production facilities Made CARBON NEGATIVE products, including car parts!

American History is all about Hemp, arriving with the Puritans in Colonial America, it was planted from day one. Hemp was planted immediately to supply materials such as ship lines, sails and accessories for the Mayflower. All sea vessels back then carried stockholds of hemp seeds for various uses. In case of shipwreck, for example, they could grow the replacement parts, "fact"!
Our founding fathers were big proponents of growing hemp everywhere as it was the original Colonies best source of Fiber. George Washington, Thomas Jefferson, and Benjamin Franklin not only Advocated and spoke of great things about the plant, but are actually part of the creation of "Hemp industry".

Benjamin Franklin became one of "history of science’s" great practitioners, his inventions are regarded as some of mankind’s greatest achievements. It was Franklin’s brilliant & revolutionary deduction that one could safely discharge lightning striking a structure, channeling the charge down a wire to a rod buried three feet into the ground, which is still a foundation of today’s international fire protection codes. By explaining and controlling one of nature’s most fearsome displays, his gift to humanity was the knowledge of what lightning really was, ending  decades of ignorance & superstition. He even used Hemp Rope to fly those Kites.

At the age of 47, Ben Franklin was awarded the Copley Medal, his era’s equivalent of a Nobel Prize in Physics.

Franklin was also very much involved with Farming & Agriculture which included the CULTIVATION of HEMP for Textiles! He even offered Farmers financial incentives for growing it. He opened USA's first "Hemp Paper Mill", creating independence from relying on books & paper from England. The Declaration of Independence as well as the U.S. Constitution were made from Hemp paper.

Jefferson also wrote about the advantages of hemp over tobacco, in use, labor and for the sake of the land, on hemp paper.

Benjamin Franklin owned one of the first paper mills that processed hemp into parchment, that of which was used in many first drafts that later became the documents that America stands by. The Declaration of Independence, Thomas Paine’s “Common Sense”, the Federalist (and Anti-Federalist) Papers, the Articles of Confederation, and of course the United States Constitution were all written on hemp paper.

George Washington not only grew hemp for clothes (home spun), he actually has a quote from his diary from August 7, 1765: “— began to separate the male from the female hemp at Do — rather too late.” It is debatable, but today that technique is used solely for drug potency in marijuana. There are a few trace evidences to the idea that our founding fathers smoked hemp for pleasure, but it seems likely.
George Washington's famous Qoute : "Sow (Plant) the Indian Hemp Seed Everywhere" on his estate!

Did Our American Presidents Smoke Hemp?

Dr. Burke, who is a president of the American Historical Reference Society, has noted seven of the earliest presidents as hemp smokers: George Washington, Thomas Jefferson, James Madison, James Monroe, Andrew Jackson, Zachary Taylor and Franklin Pierce. According to Dr. Burke, “Early letters from our founding fathers refer to the pleasures of hemp smoking,”

After all Thomas Jefferson smuggled seeds from Asia which is believed to be the origin of cannabis. For thousands of years before Americans were growing hemp, Asians were smoking it and Utilizing it especially for Medicines. It’s hard to say, but if Jefferson was aware of the hemp culture in Asia, one would think he would have seen the delight in smoking it as well, and thus provoked him to bring the Asian strain of cannabis to America.

It seems impossible for some people to think of our first presidents and leaders as hemp smokers, especially with today’s view on slow witted people whom smoke marijuana. Yet some people look at the views of those days, furiously scratch their head and wonder why such once implemented necessities to build this nation, are being neglected. If the hemp industry today was a vast Farm Field, the US is Not Harvesting and Not Reaping Our Biologic & Evironmental Prosperity. Education is the Answer - the Key,...is WE! 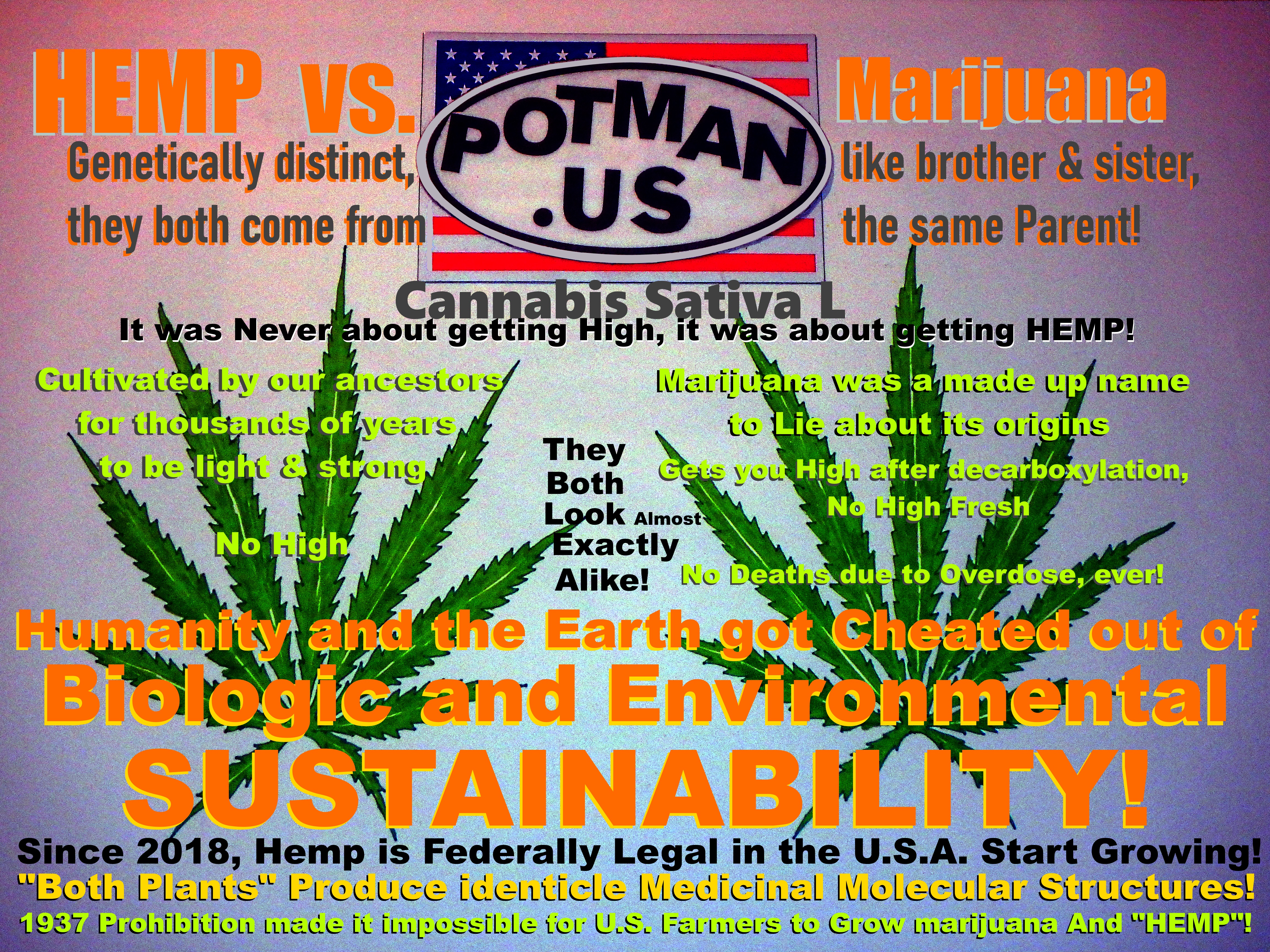 We Are All Pot - Men, Women & Children! Humans "co Evolved" Eating, what is best classified as a "Vegetable", Cannabis.
Thanks to evolution, human beings achieved symbiosis with the unique and vital cannabis plant. Symbiosis between US & Pot, happened, by consuming this plant, over the course of tens of millions of years.
There is no other explanation Why it is an integral part of Our physiology. Natural Cannabinoids present in Humans are the Same Exact cannabinoids present in cannabis and found nowhere else on Earth! At least 4 cannabinoids in mothers breast Milk ARE NOT FOUND ANYWHERE ELSE, except in Cannabis.
Cannabis Cannabinoids Fit Our bodies Receptors Better than any Pill Western Medicine can create (hence, no serious side effects)! The Human brain stem co-evolved, to Not let us Die from even heavy exposure, Heavy Cannabis exposure was once used to Treat people Dying from Toxicity!
Mammals have  Endocanabinoid Systems (E.C.S.), which Regulates (homeostasis) our most  important bodily functions.
The E.C.S. was Discovered in the 1990's and is still NOT TAUGHT in MEDICAL SCHOOLS because of Political intervention! Only 13% of Medical Students (mainly Nutritionists) have been Educated about our E.C.S.
If this Information does Not Make You a Human Rights Advocate, you are "not human".

Written by Frank Altomari on 01 February 2021. Posted in News